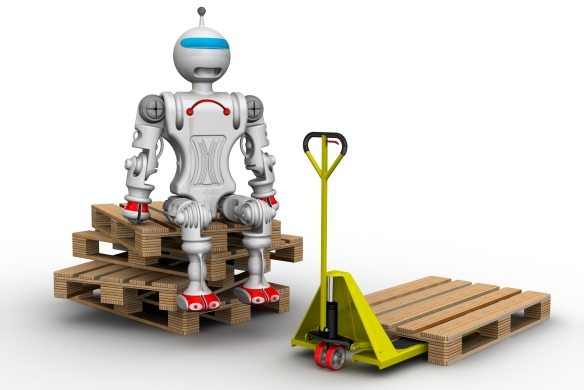 Amazon robots and the future for fulfilment

We’re not afraid to admit it. At DMC we love all things technology – and Amazon’s innovations are no exceptions.

Robotics and Automation News reports on a wide range of trends in robotics – and points to Amazon bringing robotic fulfilment to the UK which could, “drastic efficiency improvements in its fulfilment process”.

Amazon have developed a robot, which looks like a robot vacuum cleaner, and can pick items and deliver them to the pack stations without any intervention – thus removing the human need on the warehouse floor.

Their average ‘click to pick’ time for a human is currently 60 minutes, but the robot is able to do this in 15 minutes. This is obviously a huge saving on time, but this is not the only benefit for Amazon. The aisle size can be reduced quite substantially, allowing approximately 50% more stock for the same warehouse size. Anyone working in warehouses and fulfillment will know just how valuable this extra space can be.

So far so good – but it does make us wonder what the back-up is. In a traditional warehouse, if an employee is absent, another can step in and still complete the orders. But if, for example, there is a power cut, the mapping for the routes gets blocked or the control system running the robots fails, what then?

Narrowing the aisles might increase profits or lower costs for customers, but it would mean that it’s not possible for a human to safely go and pick. This would effectively stop a depot running until the technical issue is fixed. This may seem a very unlikely event, but as we witnessed with the internet problems in October, electronic devices can crash, lose their way, have a power cut or lose connectivity.

What next for automated delivery?

The biggest question is where will Amazon stop? Watching a video of the robots in action, interestingly the checking and packing was still carried out by a person. Will this be their next invention? A check, pack and labelling robot?

Amazon are developing drones for the deliveries and self-driving lorries are already in testing by Mercedes. We can’t be that far from the full process automation. Amazon started out in 2005 with clear objectives to revolutionize fulfilment and reduce delivery times.

The retail giant is now aiming for an order-to-delivery time of 30 minutes. We’re sure that the last minute Christmas Eve shoppers will be delighted with this and it will, as is already starting to, mean that there is no longer a need for an online-ordering cut-off date. Drones could be challenging Father Christmas for a job before we know it!

Is Amazon for everyone?

There is one thing that Amazon needs to operate and innovate – and that’s vastness. There is only one way that delivery seven days a week is profitable for carriers, and that is volume.

The average cost for Amazon to change a centre to an automated one is $15 – $20 million and they have the infrastructure to make it work. But I doubt this is an investment that smaller distribution and fulfilment centres could handle, or would need to.

One size does not always fit all

Unless we want the entire delivery world to be run by a giant monopoly, which ultimately means less choice, there will always be a place for the bespoke options. At DMC we like to deal with local people and companies, rather than large organisations run by robots. The personal touch will always overrule cost and speed if you can offer the right customer service.

Where do robotics leave the good old homo sapien? The Internet of Things and AI is developing at lightning speed – for a company like DMC, it’s all about picking out the useful elements which provide more options for our customers. Drones may be a fantastic opportunity, but they’re not here yet and we need to remember to keep our feet on the ground until then.